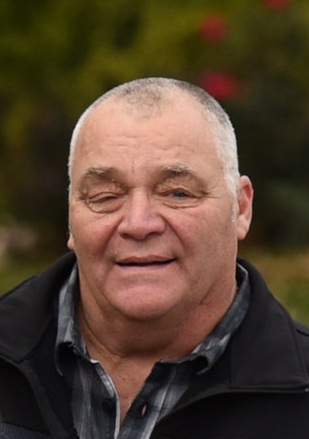 Adrian G. Book, age 57, passed away in Rockford on Monday December 9, 2019. He was born in Rockford on June 25, 1962 the son of Glenn and Joan (Helwig) Book. Adrian was a graduate of Leaf River High School. He married Tari Rose on June 2, 1984. Adrian worked as a truck driver and was passionate about trucking and semi trucks. He was a member of St. Mary’s Catholic Church in Byron where he was also a member of the Knights of Columbus. Adrian was a member of the Leaf River Lions Club, German Valley Sno-Riders, and was a former member of the FFA. He loved working, farming, and snowmobiling. He also enjoyed traveling and going off roading up north. He was a also a model tractor collector. Adrian liked having fun and spending time with his family and friends; especially bowling with his wife and friends on Sundays. He was a proud grandpa who cherished his time with his grandchildren. He had a giving spirit and was always available to help his community. He is survived by his wife, Tari of Leaf River; children, Nicole (James) Deen of Leaf River and A.J. (Darlene) Book of Leaf River; siblings, Mike (Sherrie) Book of Leaf River, Howard (Tammy) Book of Arkansas, Steve (Sue) Book of Forreston, Connie (Dave) Fox of Tampico, and Carol (Lloyd) Bellows of Oregon; grandchildren, Emily, Ciara, Hailey, Tiffany, and Benjamin; one great granddaughter on the way, and many nieces and nephews. He is preceded in death by his parents, Glenn and Joan and step mother Nellie Mae. Visitation 4:00 - 7:00 pm Monday in Farrell-Holland-Gale Funeral Home, Byron. In lieu of flowers, memorials are established in Adrian's name.

To order memorial trees or send flowers to the family in memory of Adrian Book, please visit our flower store.