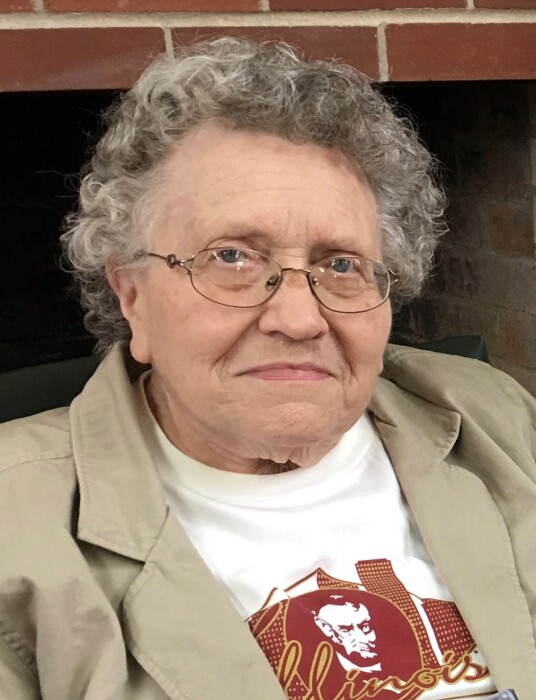 Betty Mary Ellen Croft, 94, of Oregon died April 9, 2021 in Pinecrest Manor Nursing Home, Mt. Morris, IL.  Born November 23, 1926, in Leaf River, daughter of Milford Lewis (M.L.) and Eva (Welty) Croft.  Betty’s mother died in 1928 when she was 1-1/2 years old. Betty went to live with her grandparents, John D. and Addie Croft in Leaf River, IL.  Raised by grandparents, she experienced what it was like to grow up in the Great Depression.  Her Grandpa, John D. Croft died the year before Betty graduated Valedictorian at Leaf River High School in 1944.  She was awarded the County Scholarship to the University of Illinois. After graduation Betty and her Grandma Croft moved to Urbana where she earned her Bachelor’s Degree in Latin, Phi Beta Kappa, Beta Phi Mu and Bronze Tablet honors.  She went on to earn two advanced degrees in The Classics and Library Science.  Betty worked for the University of Illinois through the 1950s, ‘60s, and ‘70s, retiring as a full professor.  From 1960 until her retirement, she was head of the Library Catalogue Dept.  At that time, it was the third largest library in the United States.  Following the U of I, Betty sought a slower pace and accepted a position as Technical Advisor for Northwest Missouri State University Library in Maryville, MO.  During her 12 years at MSU, she was an advisor on the design of their new library building and, her last two years, Director of the Library.  From Maryville, Betty moved back to Ogle County where she became known as a “Tourism Advocate” for Oregon, writing and printing at her own expense a number of brochures to tell some of Oregon’s rich heritage.  Betty identified local sculptures and named them in her “Sculpture Trail” brochure.  She produced “Margaret Fuller’s Visit to Oregon,” identified “Seven Wonders of Oregon”, and produced a post card of Black Hawk.  Continuing with her interest in the arts and Oregon’s connection to the famed sculptor, Lorado Taft, Betty organized a performance of the tableau vivant “The Blind” by Maeterlinck.  From the original play, Lorado Taft did a sculpture called, “The Blind.”  When a friend, Lynn Young, found the working model of Taft’s last sculpture called “Aspirations,” Betty bought and donated this to the Oregon Library Art Gallery.  Betty’s love of books was fostered as a high school freshman when a teacher put her in charge of the school library.  She loved it.  She gained a wide range of knowledge inspired by years of library work.  She was kind, compassionate, and giving.  Betty was a member of St. Mary’s Catholic Church, Oregon.  She gave time to help establish the Leaf River Historical Museum, to restore Rice Cemetery, to work in the Oregon Genealogy Department of the library, to promote tourism from the Information Booth in Oregon, and at the feet of Black Hawk to tell the story of Lorado Taft and his sculptures in Oregon.  Betty was never married but enjoyed her family.  She is survived by Nephews: Robert (Tonya) Croft Jr.  of Boulder, CO; John (Karna) Croft of Normal, IL; Nieces: Patricia Engle of Rock Island, IL; Sue Ellen Croft of Oregon, IL; and Crystal (Tim) DePuy of Port St. Joe, FL.   Grand nephews and nieces:  Nicole (David) Reichel, CO; Robert (Audrey) Croft III, CO;  Taryn (Joe) Stewart, FL; Eric (Angie) Croft, IL; Greg Engle, IA; Freeland Bill (Katie) Engle, WI; and Robin Engle, IL; Sara Croft, IL; Peter Croft, IL; and their families, and other dear friends Sister Marion and Lynn Young, ME.  Predeceased by her parents, her stepmother, Fern Davis Croft, brother, Robert E. Croft, sister, Bonnie M. Carlstrom, and Sister Marion of School Sisters of Notre Dame. A graveside service will be held 11:00 a.m., Friday, April 16 in Silver Creek Cemetery, Leaf River. Memorial donations in Betty’s name may be made to:

To order memorial trees or send flowers to the family in memory of Betty M. E. Croft, please visit our flower store.