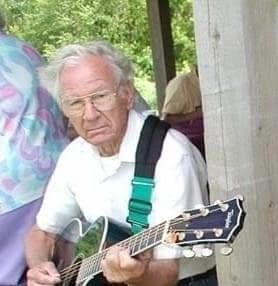 Billy Edward Holder, 92, of Stillman Valley Illinois passed away on September 3rd, 2020. He was born in Hoxie, Arkansas, the son of Will Henry and Leona (Spargo) Holder.

He enjoyed classic cars, motorcycles, antique tractors, and music. He could play the fiddle, banjo, and guitar and enjoyed listening to and playing country and bluegrass music. He loved to sit and pick with his relatives and friends. When he was younger, he was a talented baseball player. As he got a little older, he enjoyed watching and listening to major league baseball. He was an accomplished drag racer and had several cars over the years that he would race at various local drag strips. Later in life he enjoyed watching motorcycle and auto racing on television. He enjoyed gardening and would grow many fresh fruits and vegetables to feed his family and friends. He enjoyed fishing in the ocean and towed his boat from northern Illinois all the way to Key West on several occasions to do just that. He also liked to go out to deeper water on the “bottom fishing” boats while visiting Key West in search of larger fish. He enjoyed pheasant and rabbit hunting.

This list is not all inclusive. Throughout the years Billy had a wide variety of interests that he pursued, but most of all, he enjoyed spending time with all of his friends and family.

A private family graveside service will be at the Big Mound Cemetery near Davis Juction with the Pastor Randy Snider officiating.

To order memorial trees or send flowers to the family in memory of Billy Holder, please visit our flower store.