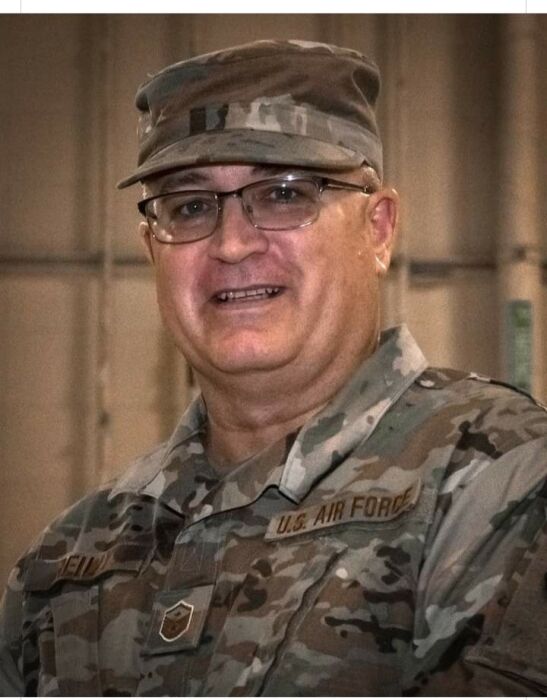 Daniel H. Reilly, age 57, passed away at home, surrounded by his loving family on March 9, 2021. Although Dan was born in Petersburg, Virginia on November 1, 1963, he grew up in Africa and it never left his soul. Dan learned to love nature, animals, and open spaces. His love of travel and deep desire to learn eventually brought him to the US. He earned three undergraduate degrees before earning his master’s degree as well. Dan served in the Army and later joined the Illinois Air National Guard, currently serving as First Sergeant; a job he loved. His adventurous spirit took him to Alaska where he met his wife, Martha Kobel, whom he married on March 13, 2003. He joined her in Byron where Dan learned to cherish the four seasons and felt it was home.  Dan was a member of Legion Post 209, Byron’s City Council, and served in the Color Guard for Byron’s Memorial Day Parade. Dan was a planner and was always adamant that his family be prepared for anything; which inspired him to own and operate his own business, Resilience International. In his spare time, he enjoyed being with his family and being outdoors; especially having a braii and hiking. He is survived by his wife, Martha of Byron; father Ed Reilly and his wife Karla of Swakopmund, Namibia; brother, Michael Reilly of Windhoek, Namibia and niece and nephew Patrick and Alexa both of Germany; Aunt, Doris Tourville of Avon, CT; cousin, Patrick (Betty) Tourville of Simbury, CT; father-in-law, Chet Kobel; sisters-in-law, Debbie (Larry) Rose, Mary (David) Behling, Liz (Chuck) Fleddermann, and Meggan (Jeff Milburn) Franklin; nieces and nephews, Kari (Ryan), Adrienne (Josh), Kristi (Nick), Kyle, Lauren (Nick), Rachel, Whitney, Drew, Madi (Daniel), Kathryn, Madison (Taylor), and Ava; great nieces and nephews, Mason, Noah, Addison, Chet, Stella, Lucy, Maverick, and Gus; and many friends and brothers in arms. As Dan always said Drive fast – take chances! Cheers! A memorial service will be held at 11:00 AM on Saturday March 20, 2021 at the SM&SF Club; 7625 Kishwaukee Road, between Stillman Valley and Rockford, IL with a time for fellowship to follow. Masks will be required and an outdoor space will be provided for those that would prefer. If you wish to give a memorial, please donate to a charity of your choice in your community.

To order memorial trees or send flowers to the family in memory of Daniel Reilly, please visit our flower store.