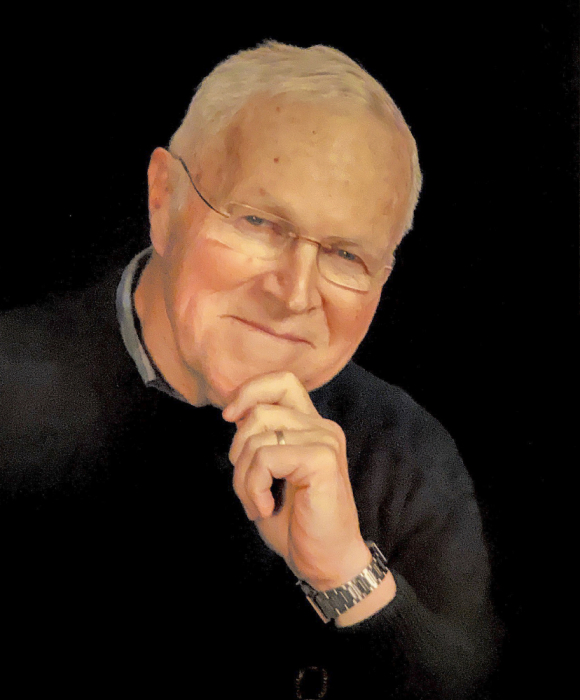 David Johnson, the man who was a driving force in music education in Byron, IL for over three decades, died May 28th at his home near Byron after a courageous battle with Parkinson’s disease. He was 79.

David grew up on his family’s farm south of Oregon, IL. He played football and kept up with the responsibilities of farm life, but his real passion was music. His affinity for music was cemented as he studied for a time at the Berklee College of Music in Boston and graduated from the esteemed jazz program at the University of North Texas in Denton.

David’s first job was in the Byron School District as the high school band director. Two years into his tenure he enlisted in the Army in 1967 serving as a trumpet player, singer, band leader, and arranger with the 5th Army Band at Fort Sheridan, Chicago and overseas with the 8th Infantry Band in Bad Kreuznach, Germany. Upon his return home to Illinois, he resumed his teaching position in Byron. David transformed the notion of music education in Byron by using his college-earned and army-tested standards for quality and discipline to coax generations of students to success in music. He was equally at home conducting the high school band and choir as he was singing along with his ukulele and a class of kindergarten students.

His serious but approachable teaching style built confidence and musicality in his students in all styles of vocal and instrumental performance as well as in music theory and composition. This was evidenced, in part, by several of his students being selected for district and state level performance ensemble appointments, as well as numerous out of state and international performances by Byron bands and choirs under David’s direction. In addition, the Byron Chamber of Commerce named David its “Citizen of the Year” in 1993.

Alongside his teaching, David maintained an active career as a professional trumpet player in several area big bands, jazz and Dixieland combos, and community bands. Additionally, he had numerous opportunities to “back up” national touring acts like Jerry Lewis, George Burns, Gladys Knight, and the Four Tops and was a regular member of the "house band" when the Ice Capades and the Ringling Brothers Circus came through town. He also served as the choir director at the United Church of Byron for many years where he volunteered for church committee and leadership positions as well.

In 1967, David took a chance on asking Kathleen Wickler on a root beer date. What transpired from that date was a multi-year long distance relationship as he fulfilled his commitment to the army and Kathy earned her nursing degree in Cedar Rapids, IA. They were ultimately married for over 50 years, and until David’s last moments in this life, Kathy was tirelessly and selflessly devoted to him as they fought his Parkinson’s disease and prostate cancer diagnosis together. She was his strength and his advocate literally until his last breath.

David understood “showing up” was to show love, and he never missed an opportunity to support his wife and children, whether it was at an early morning cross country meet, a little league baseball game, piano recitals, or making space for Kathy’s career advancement. Alongside his support of his family, David embraced many avocations including fishing, running, water and snow skiing, woodworking, and tennis and racquetball.

David was a prince and a fighter and, whether through his music, his loving words and actions, or his character and ethos, his spirit filled many people with the incredible joy he felt for life. He is preceded in death by his Parents Everett and Lorena Johnson, his biological father Leroy Gemmell, and his sister, Lorna Hanson. He is survived by his wife Kathy, their two children Aaron (Sarah), and Amy Johnson, four grandchildren, his sister Joanne (Miguel) Conde, and several nieces and nephews.

David’s work here is done. He has accepted an offer for a gig from which he will not be returning. However, he will be reuniting with friends, colleagues, and family he has not seen in a long time. Rest eternal grant him, O Lord, and may perpetual light shine on him.

A memorial service will be held 11:00 am, Monday, June 7, 2021 at the United Church of Byron with the Rev. Tyler Spellious pastor of the church officiating.  Burial will be in the Byron Cemetery.  A visitation will be held Sunday evening from 4-6 pm at Farrell Holland Gale Funeral Home in Byron.  A memorial fund is established in David Johnson’s name that will be used for a scholarship for a Byron High School student pursuing music education.

To order memorial trees or send flowers to the family in memory of David Johnson, please visit our flower store.