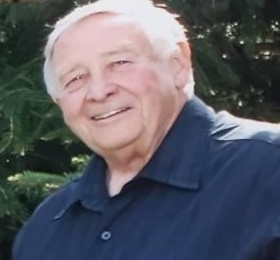 Donald Edward Welsh, age 79, passed away on August 3, 2022. He was born on January 4, 1943 in Seneca, Wisconsin the son of Edward and Edith (Emerson) Welsh. Donald attended and graduated from Gays Mills High School where he met his high school sweetheart and love of his life Carolyn Hulsizer. They married on May 18, 1963. He worked for Mattison Machine Works for 37 years before moving to Sundtrand for 10 years before retiring in 2006. He was a member of Emmanuel Lutheran Church in Payne’s Point. Donald loved to be outdoors especially snowmobiling and was one of the founding members of the Stillman Valley Snowmobile Club. He was also a member of the Hub City Cruisers. He was a die hard Packers fan. Donald could build almost anything and loved working on cars after he retired. But, his favorite thing to do was travel; he and Carolyn went on a dozen cruises all over the world. He is preceded in death by his parents, son Craig Allen Welsh and brother Dwain Welsh. He is survived and dearly missed by his wife of 59 years, Carolyn of Stillman Valley; children, Bill (Peggy) Welsh of Greeley, CO and Denise (Maki) Welsh of Chandler, AZ; siblings, Ken (Sandra) Welsh, Marcella (Floyd) Drake, Marilyn Blanton, Deloris Wipperfurth, and Betty (Harold) Otto; and many nieces and nephews. A funeral service will be held at 11:00 AM on Monday August 8, 2022 at Emmanuel Lutheran Church in Payne’s Point with Pasto Andrew Kayes officiating. Visitation will be held from 2-4 PM on Sunday August 7, 2022 at Farrell Holland Gale Funeral Home in Stillman Valley. Memorials are established in his name.

To order memorial trees or send flowers to the family in memory of Donald Welsh, please visit our flower store.