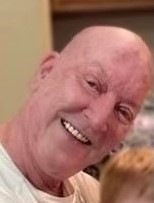 Joe L. Rekemeyer, 62,  of Rockford, died Saturday, June 5, 2021 in OSF St. Anthony Medical Center, Rockford. Born January 4, 1959 in Davenport, Iowa, the son of Lamoine and Shirlene (Sievers) Rekemeyer. Married to Maureen Wetherell May 24, 1991 in Rockford; she passed away January 6th of this year. Joe was a graduate of Davenport High School, earned his BS from University of Phoenix and then received his MBA from Capella University. He was employed as an engineer for Collins Aerospace for 37 years, retiring in 2017 and was currently working for Quest in Rockford. Joe enjoyed cars and NASCAR and golfing. Predeceased by his wife of 29 years, Maureen and daughter, Janel Gonzales. Survived by his parents, Lamoine and Shirlene Rekemeyer of Bettendorf, Iowa; daughter, Colleen (Jerry) Yarbrough of Cedar Bluff, Alabama; 8 grandchildren: Danielle Hansen, Tyler, Travis (Allison), Kendyl and Meadow Yarbrough, Jacob Ellsworth, Noah Roman and Westyn Roman; sister, Angel (John) Josten of Iowa City, Iowa; and nephews, Josh (Katy) Josten  of Las Vegas and Nick (Jody) Josten of Iowa City.  Graveside services will be held at 11:00am Friday June 11 in Big Mound Cemetery, Davis Junction. In lieu of flowers, memorials may be directed to the family.

To order memorial trees or send flowers to the family in memory of Joe L. Rekemeyer, please visit our flower store.