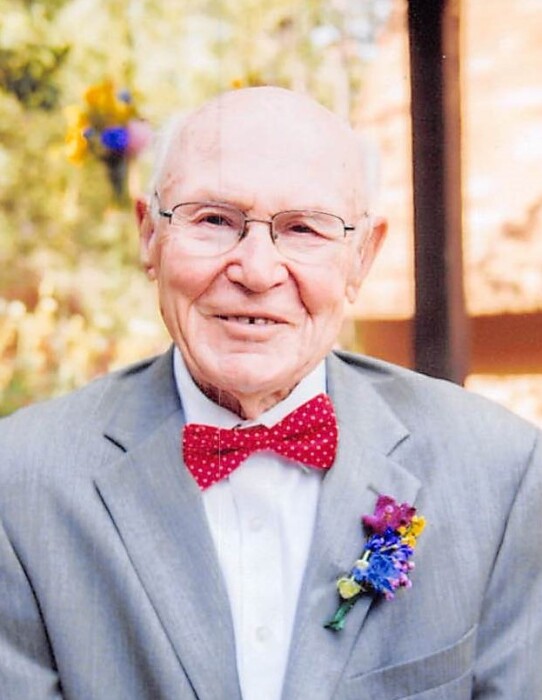 Byron – Lloyd C. Funk, age 96, died peacefully on Friday, May 14, 2021 at the Morning Star Village in Rockford, IL.  He was born April 26, 1925 in Loves Park, Illinois the son of Lloyd F. and Nellie E. (Clark) Funk.  Lloyd graduated from East High School.  He served his country during WW 2 in the U.S. Marine Corp.   During the war he served on the USS Maryland in the Pacific. He married Virginia F. "Ginny" Morehead on Feb. 23, 1946 in St. Paul, Minnesota.   Lloyd owned and operated Funk’s Super Service Station and Coffee Shop at 5 points in Rockford for 22 years.  He then worked for Sunstrand in Rockford until his retirement in 1987.  He was a charter member of the All Saints Lutheran Church in Byron where he served as Vice President of the church council and was on other various committees of the church.  He was a member of the Rockford Chamber of Commerce.  He served on the Ogle County Fair Board, was chairman of the Ogle County Economic committee, and was on the Ogle County Regional Planning Commission where he served as chairman for 8 years.  He was a member of the Cherry Valley Masonic Lodge # 173 where he served as a Past Master and was also a member of the Tebala Shrine of Rockford.  Lloyd was a Illinois Master Gardener and was recognized by the University of Illinois as one of Illinois’ outstanding gardeners in 1991.  He was predeceased by his parents, his wife Ginny in 2005, his brother Charles L. Funk, and his great grandson Henry Bragg.  He is survived by his 3 children Jan (Curt) Liljeberg of Rockford, Barb (Lance) Elfstrom of Rockford, John (Sue) Funk of Colorado Springs, CO; 7 grandchildren Matt and Marc Liljeberg, Jill, Brad, and Doug (Brittany) Elfstrom, Abby (Rich) Bragg, and Dan (Kellyann) Funk; 6 great grandchildren Annika, Miles, Ainsley, Isla, Caroline, Logan, and one on the way.  Funeral service will be 11:00 am, Thursday, May 20th, 2021 at the All Saints Lutheran Church in Byron, IL with the Rev. Janet Wold pastor of the church officiating.  Visitation will be prior to the service at the church from 10:00 am to 11:00 am.  Burial will take place at the Willwood Burial Park in Rockford.  A memorial fund is established for the All Saints Lutheran Church and the Heartland Hospice.

To order memorial trees or send flowers to the family in memory of Lloyd Funk, please visit our flower store.