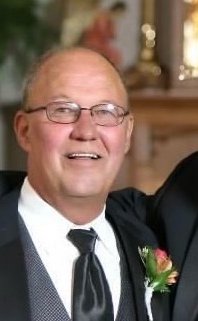 Oregon- On Wednesday, October 26, 2022, Marlin “Mick” A. Jones, Jr., loving husband, father and Papa, passed away at the age of 65 after his courageous battle with cancer. He was born June 14, 1957 in Dixon, IL proud son of Marlin and Ella (Hoffman) Jones. He was a lifelong Oregon resident and attended Oregon Schools. On September 19, 1980 he married the love of his life, Penny Last, at the First Christian Church in Oregon, IL.   As a young man he earned a living trimming trees. For the past 20 years he drove truck for Steve Benesh & sons, he had great love for what he did and for the people he worked with.  Mick had a mean roar but a soft heart. He also had the patience of a saint; he would spend hours in the garage working on projects that others had given up on.  There wasn’t anything he couldn’t fix.  Mick also enjoyed turkey shoots, auto repair, camping, Ford trucks, and fishing.  Most of all, he loved spending time with his family and friends and having good conversation with a Busch Light in hand. His grandchildren were his pride and joy, being a Papa came natural to him. His grandchildren loved his big hugs and squeezes, tagging along with him in the garage, and their weekly donut day-filled with love and sweets.  They kept him fighting until the end. He was preceded in death by his parents and grandparents, his sister Debbie Jones, grandson Ryan Niedziela, and nephew Derek Jones, what a reunion that must have been.  He is survived by his loving wife Penny of Oregon, 5 children; Christine Bohms of Oregon, IL , Timothy Miller of Sheffield, IL, Matthew (Belinda) Miller of Sheffield, IL, Carrie Carpenter of Rockford, IL , and Thomas (Chelsy) Jones of Oregon,  sister Marlene (Randy) Donaldson of Oregon, brother Randy (Mary) Jones of Oregon, close nephew Kendall Jones of Freeport, grandchildren; Nick (Nubia) Bohms, Beth (Jordan) Gorzny, Dustin Miller, Emma Miller, Conner Miller, Lucas (Kali) Miller, Chloe (Jeremy) Turner, Anthony Miller, Nathaniel Miller, Peyton (Hannah), Jayla Waller, Ella Jones, Nora Jones; great grandchildren Jaxson, Lilah, Piper, Gabe, Abi, Eva, Autumn, Joseph, and many nieces and nephews. Please join us for his memorial visitation at Farrell Holland Gale Funeral Home in Oregon, IL, on Saturday November 5th, from 10am-Noon. A memorial fund is established in his name and may be directed to his family.

To order memorial trees or send flowers to the family in memory of Marlin Jones, please visit our flower store.