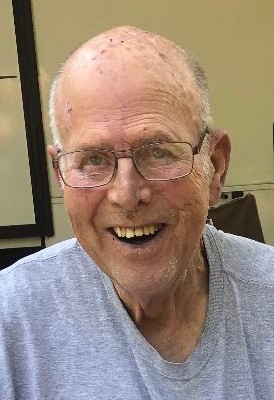 Richard James Johnston, 87, of Oregon, passed away Saturday, August 28, 2021 in Javon Bea Mercy Hospital in Rockford after a long illness and home hospice care since January of 2021. Dick, as he was known, was born July 2, 1934 in Center City, MN, the son of Elmore and Ruby (Miller) Johnston. Married to Rogene “Jean”  Rieken September 11, 1954 in Ebenezer Reformed Church, Oregon. A gifted athlete, Dick played football, basketball and ran track for Oregon High School and was part of many championships. Dick was also a boxer and Golden Gloves champion. His high school football coach told him in later years if there had been a decathlon in high school he would have been the national champion. For the majority of his career, Dick worked over 50 years for E.D. Etnyre in Oregon and his fingerprint can be found on almost all Etnyre equipment. He was proud of the respect Roger Etnyre had for him. Dick was led to the Lord when he was 29 and was an active member of the First Baptist Church in Oregon for many years. While in the hospital, he was able to be part of leading a dear friend to Christ as his savior just before his death. Dick loved fishing and hunting and from his home on the Rock River he would walk down to the dock and throw in a line whenever the mood hit him. He was preceded in death by his wife of 63 years, Rogene “Jean” Johnston and a son, Richard Scott Johnston. Survived by his children: Pete (Mary Jo) Jacobs of Barrington, Scott (Sheila Perkins) Jacobs of Raleigh, NC, Terri (Tom Lykkebak) Johnston of Winnebago, Jerry (Beth) Johnston of Byron and Thomas (Julie) Johnston of Chana; 12 grandchildren; and 16 great grandchildren. Visitation will be held  5:00 – 7:00 pm Friday, September 3 in Farrell-Holland-Gale Funeral Home Oregon. Face mask guidelines are to be observed.  A Private Family Funeral Service will be held with burial in Ebenezer Cemetery, Oregon. In lieu of flowers, memorials in Dick’s name may be made to Northern Illinois Hospice, Rockford or Rockford Rescue Mission.

To order memorial trees or send flowers to the family in memory of Richard J. Johnston, please visit our flower store.